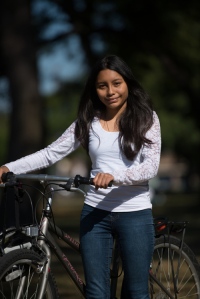 My name is Maribel Mateo and I am a freshman at Cal State Fullerton. The reason I, along with my brother and another youth, created Bike It! Santa Ana was because we wanted to see safer bike infrastructure in our community. For about three years my family didn’t have a car, and the fastest mode of transportation was biking because walking was time consuming. So as we started biking more, including my family, I noticed that many of the streets in our community weren’t safe and there were many people apart from us biking already. I am a Youth Organizer and this work includes campaign development, outreach, facilitating meetings, and educating myself and others about policy and advocacy. My role in the grant writing project for the Active Transportation Program (ATP) grant cycle 2 was doing data collection and answering questions that stated why we need the protected bike lane on Edinger Ave and how important it is to our community. Some of my interests apart from community organizing are playing sports, watching movies, and going to Disneyland because of my annual pass. 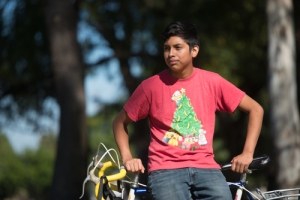 My name is Tony Gatica and I am 15 years old. I am a sophomore at Godinez Fundamental High School. I bike because my family at one point did not have a car.  I started biking because it was faster and because I would get exercise from it. Even though I felt unsafe it was the quickest and my only way of transportation. I was one of the core youth that developed the Bike It! Santa Ana campaign because I felt that through our advocacy the city could become a nice place to bike. One of the projects that I have taken lead on is creating the bike survey which allowed us to collect data on where people were biking to and from in the city. I also captured footage on a Go-Pro and learned how to edit a video which explains the obstacles when riding your bike in Santa Ana. These projects I took lead on were part of the data we used to write a grant that received state funding of $2.3 million for a protected bike lane on Edinger Ave. This is a street with a high rate of bicycle and pedestrian collisions so we are promoting safety.  Edinger Ave is also one of the streets that lead me to home, to school and to KidWorks. I am proud of being one of the youth that helped in making the city bike friendly for future generations!